In order to develop a solid online Poker strategy and get the most value out of your play, it’s vital to understand the value of the traditional Poker hands. Before diving into the hands themselves, it’s important to note that suits carry no relative value in Poker. A Queen of Spades holds the same value as a Queen of Clubs, for example, and if any players have an identical hand in different suits, the hands are of equal value. 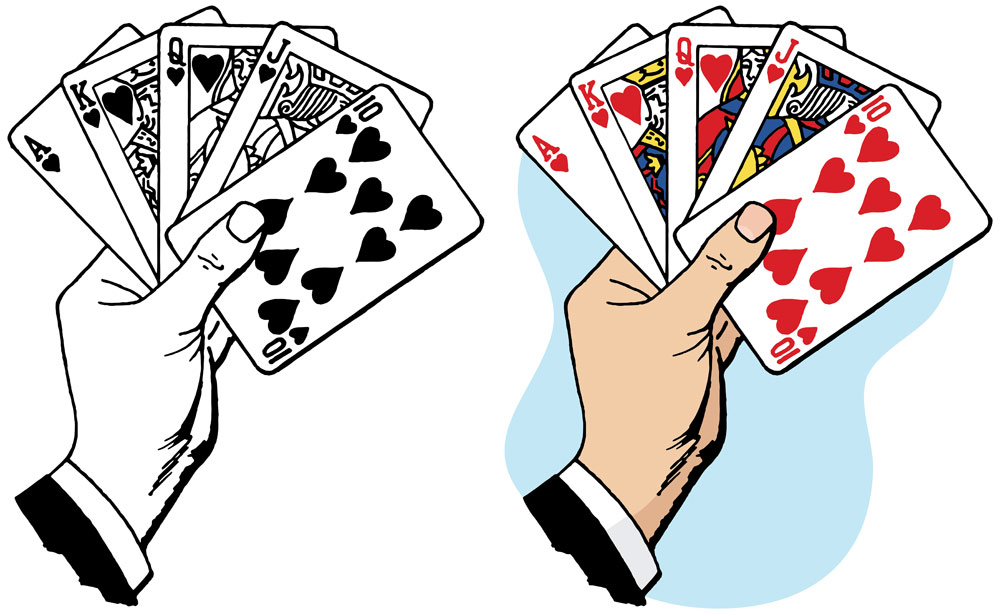 Depending on which type of Poker you’re playing, you may encounter a variety of different rules and card values. However, the traditional Poker hands are typically consistent in their values. There are roughly 9 hands that you should be aware of while developing your online Poker strategy, and we’ll go over them below in sequential order of their value.

The most common hand is No Pair, or “Nothing.” As the name suggests, the hand contains no pairs, and no other combinations of value. In the unlikely case of each player being dealt No Pair, the winning hand is decided by the highest ranked card in hand between the players. In a case where 2 or more players have the same high ranked card, the second highest ranked card will be compared, with players working their way down until a winner has been determined.

At its heart, Poker is a game of mathematics, and hand value is determined by probability. Comparatively, the aforementioned hands are far more common than the forthcoming ones. As an example, you have a 46.3 to 1 chance of getting a Three of a Kind, and a 254 to 1 chance of assembling a Straight, which happens to be the next hand we’ll cover. Going forward, the odds of getting each hand will exponentially decrease. It’s important to keep hand rarity in mind while you determine how strong your hand may be against the possible hands of your opponents at the table.

A Straight is when you have five cards in sequence, but not necessarily of the same suit. For example, 5 of Spades, 6 of Spades, 7 of Hearts, 8 of Diamonds, 9 of Diamonds. Working our way up, we have the Flush. A player has a Flush when their five cards share a suit. The last of the uncommon hands is the Full House. A Full House is, in essence, any five card hand which contains both an individual Pair, and a Three of a Kind.

There are three more important traditional Poker hands to cover, and each of them is exceedingly rare. The odds of a hand containing a full house are 693 to 1. The odds of any hand containing a Four of a Kind, our next hand, are 4,164 to 1. As a result, the following hands are desired and particularly difficult to beat. When you’re developing your online Poker strategy, it is essential to understand just how rare, and consequently, strong these hands are.

The Four of a Kind is four cards of equal rank. Next is the Straight Flush, which is five cards in numerical order with a shared suit between them. Lastly, within the Straight Flush, it’s possible to assemble a Royal Flush. The odds of doing so are staggeringly low, roughly 649,739 to 1. A Royal Flush contains an Ace, King, Queen, Jack and 10 of the same suit. It is the highest valued hand in the game, which makes this hand unbeatable.

Learning the values of these hands, and the probabilities of assembling any individual hand will help you to make strong, logical decisions while playing UK online Poker. While attempting to get the most out of your online play, understanding the odds and playing to them will put you on the right path to success.